I ‘met’ Kerry J. Donovan when I was an indie author and we belonged to the same online support group. All I know about him is that he was born in Dublin, now lives and writes in a stone cottage in rural Brittany, France, and that he is a skilled cabinet maker. Kerry claims to use ‘the same artistic approach to construct my novels’. Let’s find out more! 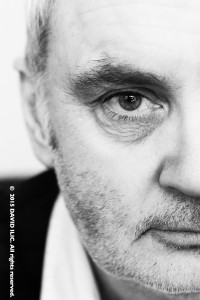 Welcome, Kerry. Please tell us a little about the books you write.

My crime thrillers are a series featuring veteran detective David Jones of the Midlands Police. The latest, Sean Freeman, is chronologically the first in the  series, but it is, in fact, the third published instalment.

In the first two Casebooks, Raymond Collins and Ellis Flynn, the eponymous characters were, dare I say it, evil bastards with few, if any, redeeming characteristics. In Sean Freeman, I wanted to create a more sympathetic lead villain, one that the readers might grow to like. The core tension in this story is that, although the reader is cheering for the hero, David Jones, they might just hope Freeman, the genius locksmith, escapes justice.

There are real villains in the piece though, foremost among them being Freeman’s gangland boss, Parrish. He’s a vicious creature with no scruples, driven only by his greed and his love of (and obsession with) diamonds. Using bribery and threats, Parrish coerces Freeman to steal ‘sparklies’ for him.

What happens? Will Jones catch his man? You’ll have to read the book to find out.

By the way, I also have a fantasy thriller, The Transition of Johnny Swift, available in print and e-book.

So you don’t just write crime? What else are you working on?

Currently, I have two projects on the go, the above-mentioned On Lucky Shores, and another Casebook (working title, Cryer’s View).

On Lucky Shores is a Colorado-based adventure yarn almost ready to release. The book is my homage to the ‘lone hero facing impossible odds’ meme. It should be out later this year.

Cryer’s View is another Casebook and a departure from style in that I’m writing it in first person from the POV of David Jones’ protégé, Detective Sergeant Phil Cryer. In UK police terms, Phil is David’s ‘bagman’ or junior partner. I’m using this writing device so the reader can ‘see’ Jones through the eyes of another character, and one who’s integral to the whole series. Cryer is in his thirties, twenty years younger than Jones, so finding his ‘voice’ is a challenge.

Heck, nobody said writing should be easy, did they?

What makes it easier for you? Where do you like to write?

I write in my attic studio and need total silence. Shhh! 🙂

Do you see yourself in any of your characters?

Good question. My wife thinks all the worst parts of David Jones (his persnickety nature, need for order, and his mistrust of technology) is pure me. I don’t see it, really I don’t.

Do you have any time left for social media, or it is just a chore? How much do you do?

Too much as it gets in the way of my writing, but not enough to promote my books into the stratosphere.

Give us your top tips for authors

Write. Sit down at a typewriter or a keyboard and write. Read loads and loads of different books from different authors and see what works, or doesn’t work, for you, and then try to better it.

Find a few honest readers who’ll tell you the truth (that your manuscript needs work, it’s not perfect, it really isn’t), and then rewrite it.

Find a decent editor — it really is impossible for authors to edit their own work. Just because we know what we meant to say, doesn’t mean readers will see the same thing in our words.

That’s it really. Learn the craft, write, rewrite, edit, and rewrite some more.

Well, these days, you have decision to make if you want others to read you books. Do you go the traditional route, or will you try self-publishing?

Now that’s a different matter! I self-publish for control and speed to press, but that’s my choice. Your choice might be different.

Kerry, it has been a pleasure hosting you on my blog. I’ve read a couple of your books and really look forward to enjoying more.

The first novel in the DCI Jones Casebook series of crime thrillers.

“Diamonds are nothing more than compressed carbon.”

Veteran cop, DCI David Jones, is tough and uncompromising. His Serious Crime Unit has the best arrest record the Midlands Police Service has ever seen. Jones and his dedicated team work hard to keep it that way.

Locksmith turned jewel thief, Sean Freeman, is the best in the UK. He’s never been caught, and the police have never even come close. When Freeman’s vicious gangland boss, DB Parrish, forces him to break into the Stafford Museum, the UK’s most secure premises outside of the Bank of England, he’s in trouble. The Stafford Museum is in the middle of Jones’ jurisdiction.

Someone’s record is going to suffer.

In this opening instalment of the DCI Jones Casebook series, veteran detective, David Jones tackles a series of cases and faces a clever and engaging criminal he respects, and would probably like—under different circumstances. But Jones has a job to do and Freeman is going down.

You can read this book as a stand-alone novel.