I first met Jo on a writing course in a castle in Scotland. We’ve been through a lot together, so I was thrilled when her novel, The Oyster Catcher, hit the best seller list – and it seemed very appropriate to ask Jo to be my first guest on this blog.

Welcome Jo! Thanks Jenny, it’s great to be here.

Tell us about your route to publication.  I was published by Accent Press in November 2013. The Oyster Catcher went to number 2 in Amazon top 100 kindle charts. The book won the Romantic Novelist Association’s award for debut novelists, The Joan Hessayon Award and best e-book at The Festival of Romance. From there, in April 2014 I joined Headline Publishing. The Oyster Catcher was re-released by them in November 2014.

That’s some journey! I hope you are enjoying it all. What inspires your writing?   I’m always inspired by places and the food that’s produced there. When I go on holiday I actually take cook books in my case! The Oyster Catcher is set in the oyster beds of Galway Bay where I lived for three years, and The Chestnut Tree is a novella set in Kent. It’s an autumnal story about sweet chestnuts. My latest book, The Olive Branch, came about because my brother and his wife have a small holding in Puglia with their own olive trees and every year the olive harvest is the talk of the town!

Food, hmmm? And what are you working on at the moment?   I’m working on my new book set amongst the vineyards of South West France called A Vine Romance.

Wine as well then? Even better. What’s your preferred writing method – are you a plotter or a pantster?  A plotter. I couldn’t drive from one side of the country to the other without knowing where I was going. But that’s not to say I might not take the scenic route along the way!

That sounds pretty much like me. So what about your characters? Do you see yourself in any of your them?  Every one of my heroines has a little bit of me in them. Usually the bit where they refuse to give up!

Well, it paid off – you got there in the end! Do you have a favourite writing spot?  Yes, I used to write in my car. I’ve now bought myself a camper van and every morning pack my flask and my sandwiches and head for the beach.

Give us your top tips for authors   Keep going. I recently heard a quote that said keep typing until it turns into writing and it’s so true. Get it down and make it better later.

Great advice, Jo. I must keep reminding myself of that. What is it they say? Get it written then get it right. Well, good luck with A Vine Romance – I can’t wait for the launch! Hope it’s in France! 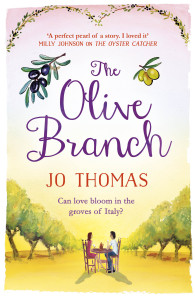 You can buy almost anything online these days. But is a crumbling Italian farmhouse a step too far?

Ruthie Collins certainly thinks so when she arrives amid pouring rain to an olive farm she doesn’t know the first thing about running. But for Ruthie, newly single, anywhere has got to be better than her mum’s settee. Hasn’t it? Life can change with the click of a mouse. But the finer things – friendship, romance, and even the olive harvest – take time to grow. Can Ruthie put the past to rest and find her own piece of the Dolce Vita along the way?

Jo Thomas worked for many years as a reporter and producer, first for BBC Radio 5, before moving on to Radio 4’s Woman’s Hour and Radio 2’s The Steve Wright Show. In 2013 Jo won the RNA Katie Fforde Bursary. Her debut novel, The Oyster Catcher, was a runaway bestseller in ebook and was awarded the 2014 RNA Joan Hessayon Award and the 2014 Festival of Romance Best Ebook Award. Jo lives in the Vale of Glamorgan with her husband and three children.